Welcome to fantastic gameplay where you will use your character to attack with a special pose and defeat your enemies. The Angle Fight 3D by Gismart is an awesome game where you need to select your weapon and take on your enemy on a fierce duel with unique weapons. This is one of the latest casual games that offer straightforward and enjoyable gameplay. Angel Fight 3D is a fast-paced action combat game with colorful characters and remarkable weapons where the player will be fighting for glory.

Become the king of the battlefield now with exciting gameplay where you unleash the character’s unique abilities and boost their power. You need to choose your weapon wisely and practice moves using adjustable settings. Explore the multiple environments with enemies to defeat as you progress along with the various levels of the game. Join over 1 million players around that world enjoying this game now.

This is a game that gives a chance to test your understanding of battle tactics, reflexes, and stance! Here, you should adjust your hero stance before the battle starts. Then, you’ll need to tap on the “Push” button once you’re ready. Demolish the opponent with one rapid attack and take all the glory! Note that there are many levels to complete in this game. Also, you will need to fight against a number of opponents. For this reason, feel free to select the best stances and weapons to win the duels!

The game is free and with no ads making it an excellent choice for gamers who are searching for an amazing casual action game. So, players will enjoy the action-based gameplay without experiencing any interruptions. It’s easy to play the game with simple swipes on the screen to make a winning stance, and tapping the ‘push’ button to attack! Earn points for each successfully defeated opponent and you would be able to unlock more fantastic weapons. ! Choose the perfect weapon and enjoy the Angel Fight 3D game!

Become the part of the duels between colorful characters that have brutal weapons in their hands! Be the first to attack and win the game. Here are few features that make the game stand out.

Ultimate Fighting Simulator – the game presents a duel where the gamer can enjoy eliminating the enemies. Notably, the characters are human-shaped but made with marbles. That is because after being attacked with the available weapons, they dismantle into small colorful marbles. There are so many weapons that you can use to defeat your opponent. You will also be given the chance to determine the final stunt of your character that will make sure he takes out the opponent without being hurt.

The weapons are on the bottom of the game interface. If you need to select the best weapon, you will need to swipe to the right or the left to see all the displayed weapons. Make sure you win the duel by piercing through the opponent with your weapon. If you fail to do so, you will fail in the game level and start again. Download the Angle Fight 3D game now, swing your weapon, and enjoy the fastest wins against enemies.

A Range Of Weapons – at the beginning of every game level, you will need to select the weapon you will use. Weapons are awaiting your selection before you strike with your finest battle pose. There are swords, bows and arrows, spears, light sabers, shields, long swords, and more. The only thing you need to do is to aim with accuracy and overcome your opponent. If you are ready to take up the challenge, download the game now!

Many Exciting Levels – this game comes with many levels to play and enjoy. Each level allows you to fight an opponent with a unique weapon and stance. However, you will be able to adjust your fighting stance based on what your enemy does. You’ll face many strong enemies in the Angel Fight 3D game and you must apply your creativity to win!

Wide Range Of Opponents – every level offers a new challenger. You will face enemies such as high-fructos, devil blade, biscuit meg, mauve cactus, delirium, sir shark, and more. Show your fighting skills against all the opponents. Ensure you adjust your stances based on the attack style of the enemy.

Stunning Graphics – the fighter characters of the game are very realistic in terms of movement and reflexes. Besides, the gaming environment is also very smooth and lifelike.

How to Download And Install Angle Fight 3D – Sword GameApk

Great update arrived! In this version we added:
- New upgrades across our systems
- Maps and skins galore – this is style revamped
- Bug fixes than make gaming so smooth
We can't wait to try it! Can you?! 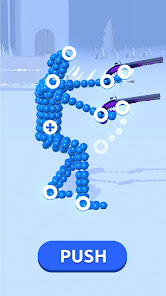 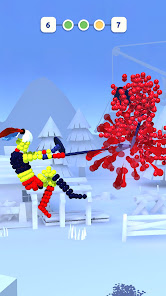 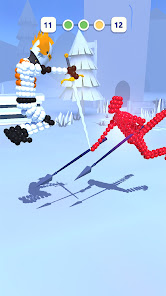 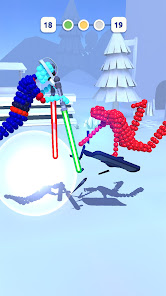 You are now ready to download Angle Fight 3D - Sword Game for free. Here are some notes:

Home › Games › Casual › Angle Fight 3D Mod APK 0.7.18 (Unlimited money, no ads)
We use cookies on our website to give you the most relevant experience by remembering your preferences and repeat visits. By clicking “Accept”, you consent to the use of ALL the cookies.
Do not sell my personal information.
Cookie SettingsAccept
Manage consent